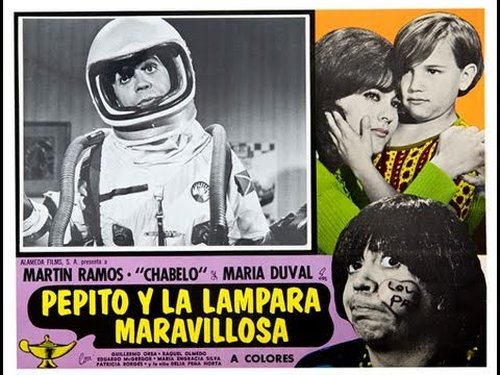 Pepito is punished in school for misbehaving, by his teacher. His punishment is writing an essay on a house utensil. On his way home from school, he buys a small saucer. Pepito lives with his mother and his not nice step father. When he gets home, he begins to clean his saucer, and it turns out to be Alladins Lamp. When Pepito sees the Genie, he asks him to write his essay for him, his work is fantastic. Pepito is questined by his teacher and the Principal of the school, he tells them the truth, but they don't belive him, and instead is assigned a more difficult homework. Pepito has the Genie once more write the composition for him. Everybody at school, thinks Pepito is a super intelligent child, and he is also outstanding in sports, winning a lot of gold medals, also thanks to the Genie. Pepito's step father who is not a nice person, wants to get hold of the lamp, but instead he jumps into the lake, and drowns, trying to retrieve the lamp that Pepito had thrown. 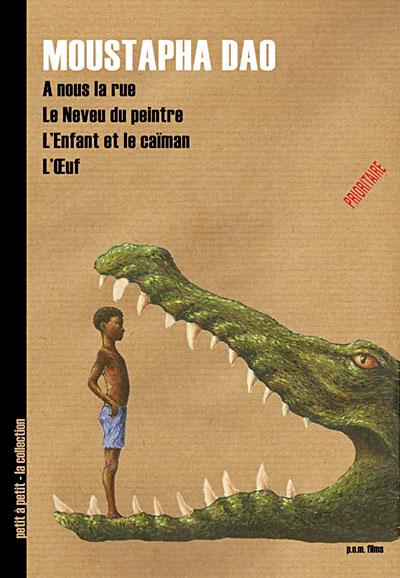 L'enfant et le caïman / The Child and the Cayman

A cayman is lost in the bush, and asks a child for help; in exchange, he promises not to eat him. But once the child has helped him get back in the water, he refuses to keep his promise. This story, from African oral tradition, was written down by Moustapha Dao; it is a mixture of dream and Fiction. Some of the animals in the film are real (such as the cayman, the horse and the cow), but others (like the hares) are played by children wearing masks. 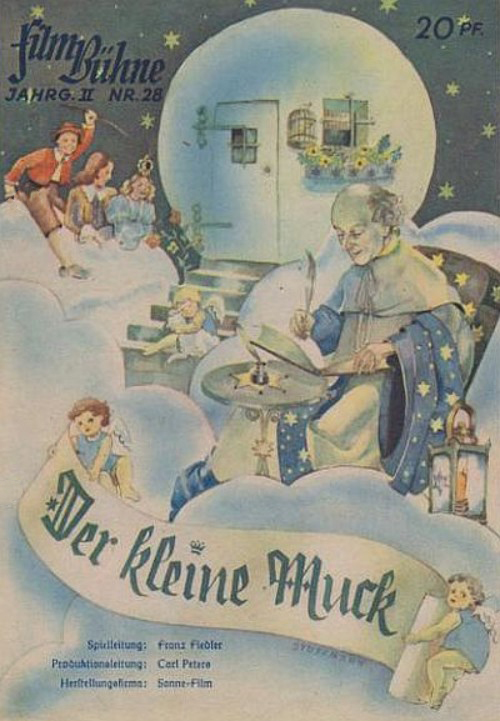 Based on a fairy tale by Wilhelm Hauff (1802-1827).
This children's film is a little surprise from the Nazi period (1944). Though certainly not a good film, the adaptation of the fairy tale is fine (good story telling), the cast is charming (note Gustav Waldau as Mister Moon), pacing is good and there are some nice special effects and sets; I especially like the moon designed as a cottage with garden). This film makes one curious to an unknown aspect of the German cinema during the Nazi period: films aimed at children only. Jan Onderwater, IMDB 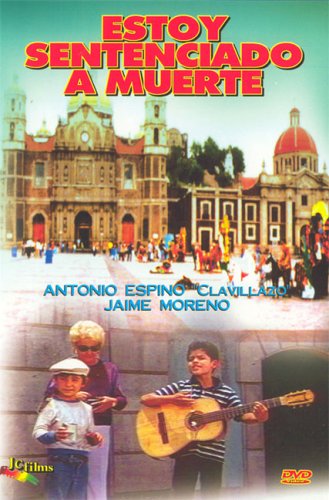 Juan Pablo - a young boy who leads a gang of teenagers that rob people. His father, once a singer, handed down his beautiful voice to Juan who occasionally sings in the streets in exchange for money. His luck seems to change when he meets an agent who promises to make him a star...
Mexico
In Spanish
Дальше »
Автор: blues на 09:24 Комментариев нет:

Postcards from the Desert Island (2011) 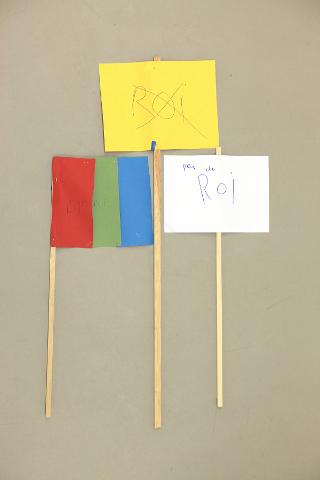 Postcards from the Desert Island documents a 3-week workshop with students from the École Vitruve, an experimental, self-run elementary school in Paris. Inspired in William Golding's novel Lord of the Flies, the artist asked the pupils to turn the school hall into a desert island, and to relate themselves to such new territory. The video documents the children's organisational methods, their approaches to the problematics raised by self-governance and by the possibility of imagining institutions and social relations from scratch. 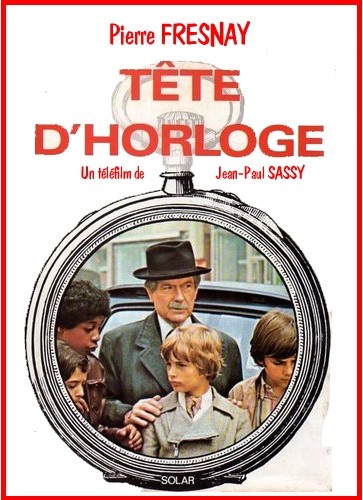 ***
Google translated from the wiki: An ordinary day in 1969, without an explanation first, all watches, clocks and clocks of the world stop at midnight. The time is gone and no longer allows to regulate human activities. Within days, the distress is spreading and governments are in a hurry calm the distraught people. Only the private course Octave Gildas in Paris, Mr. Drouin, old traditional and dreamy teacher, does not seem in the least affected by this event, continuing to meet as usual to the second its immutable timetable, which it earned the nickname "clock head." Apparently his watch - yet an old pocket watch - is the only one that continued to operate... 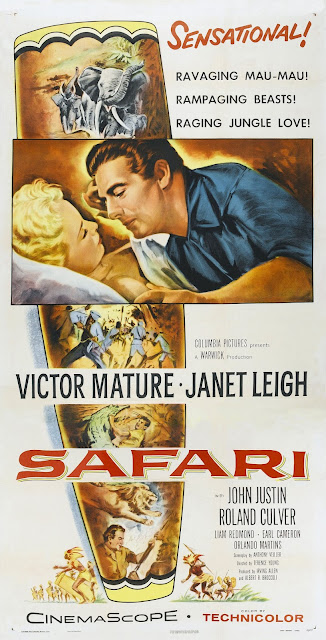 Wealthy eccentric Sir Vincent Brampton and his fiancée Linda Latham hire Ken Duffield to lead them on a jungle hunt. Duffield is looking for the murderer of his son; he gets the killer and Linda.

Aladdin and the Wonderful Lamp (1917) 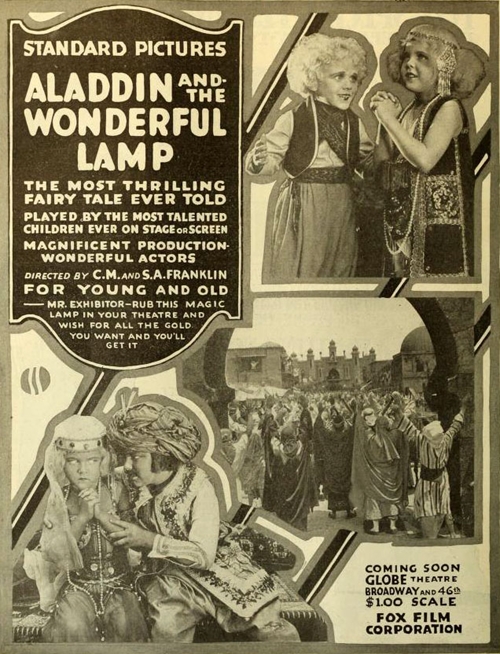 Directors: Chester M. Franklin, Sidney Franklin (as Sidney A. Franklin)
Stars: Francis Carpenter, F.A. Turner, Virginia Lee Corbin, Alfred Paget, Violet Radcliffe, Buddy Messinger, Lewis Sargent, Elmo Lincoln, Raymond Lee, Lloyd Perl
In Bagdad, Princess Badr al-Budur, the daughter of the Sultan, falls in love with Aladdin, the son of a poor tailor, and rejects the suit of evil alchemist al-Talib, her father's choice. Al-Talib consults his Evil Spirit, who advises him to find the magic lamp hidden in an underground cave. Unable to get it himself, al-Talib hires Aladdin, who secures the lamp but keeps it when he realizes al-Talib's wickedness. With wealth obtained through wishes, Aladdin courts the princess. After the lamp changes hands between al-Talib and Aladdin, al-Talib steals it and abducts the princess to the desert. Aladdin follows with only a gourd of water. Suffering from thirst and exhaustion, Aladdin nearly succumbs, but the horsemen of the Sultan, who learned of his daughter's abduction, ride up and rescue Aladdin. Meanwhile, al-Talib, who with the lamp's power has erected a palace, threatens to throw the princess to the lions unless she marry him. Aladdin and the soldiers arrive just in time to rescue her and recover the lamp. Al-Talib dies in the lion's den. 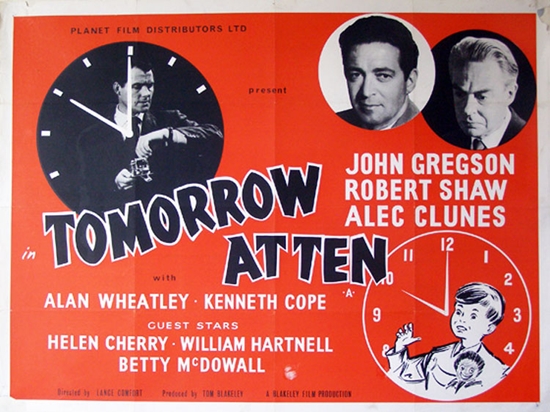 Police investigate the kidnapping of a boy imprisoned with a time bomb. 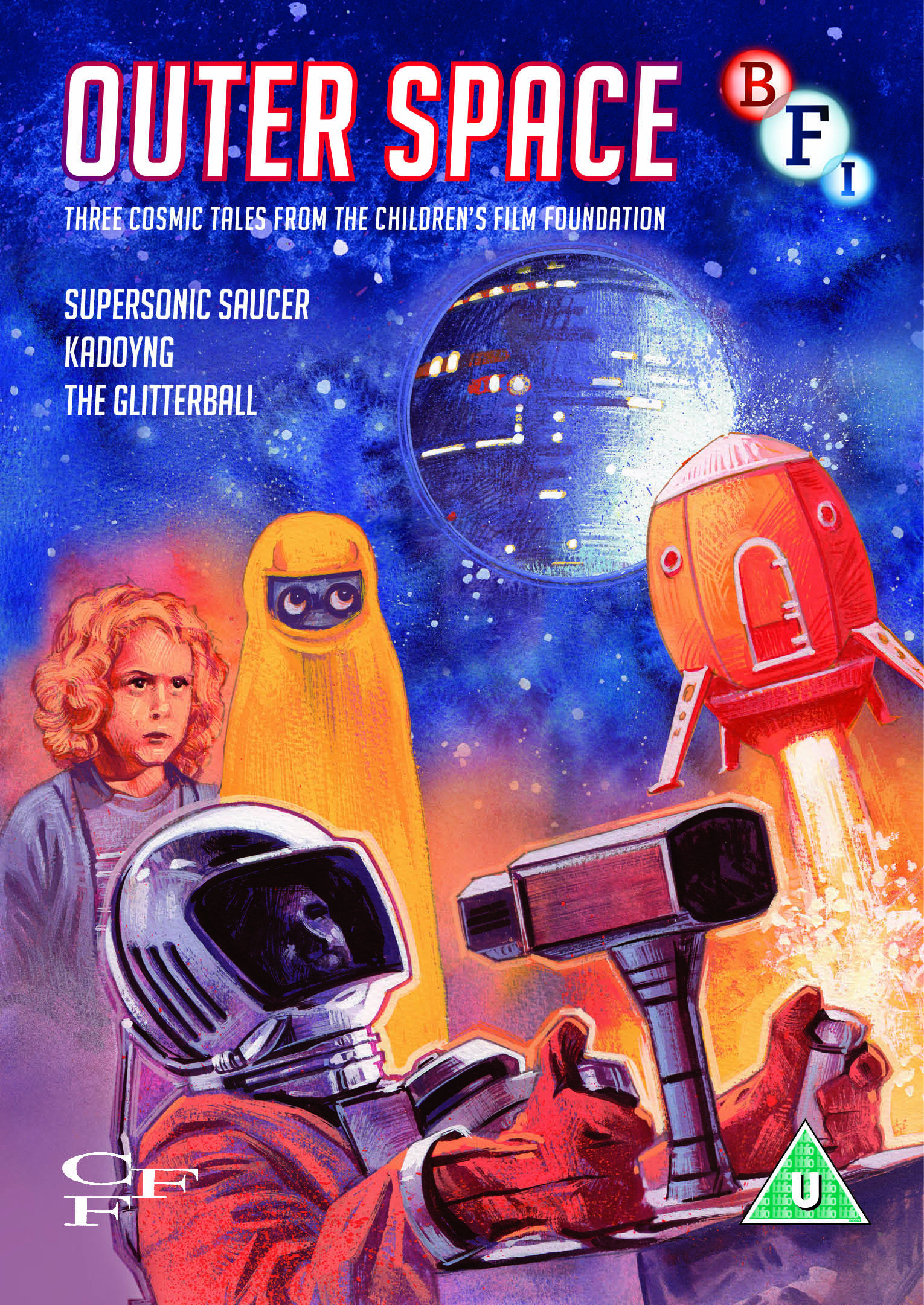 A group of schoolchildren come upon an alien from Venus, and help him against a gang of criminals who are trying to kidnap him. 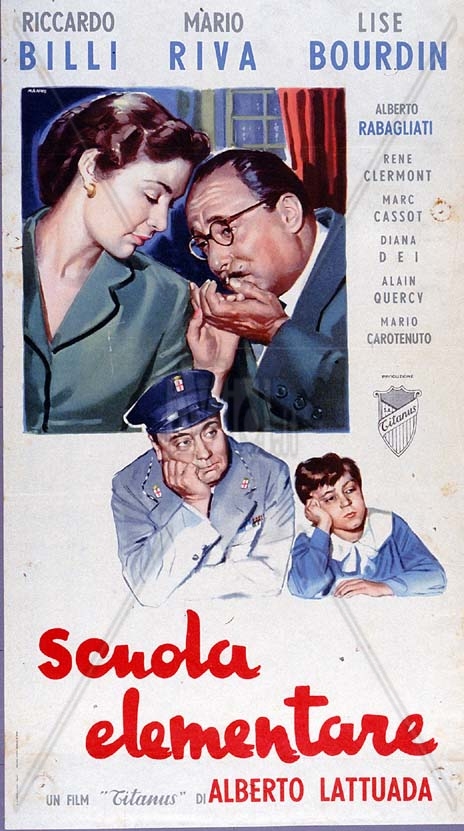 The story of an elementary school-teacher from the South who is sent to teach in an industrial city in the North. 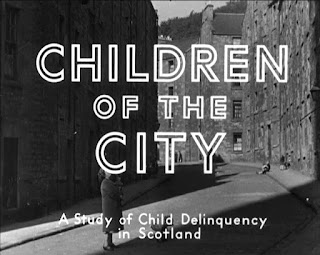 Attitudes to and treatment of juvenile delinquency in Scotland.
Wartime conditions and poor homes are responsible for much juvenile delinquency in Scotland. The films tells the story of Alec, Duncan and Robbie, three Edinburgh boys who break into a pawnbroker's shop and take money from the till and are caught by the police. We see their environment: slums, warehouses, factories, tenements etc. Homes are poor and overcrowded. Alec, the ring leader, lives with his unemployed father and apathetic mother in a slum room. Duncan's home is pleasant, but his mother has to struggle alone to maintain it while her husband is away in the forces. After school and at the weekends, there is nowhere, except the streets, where children can play. 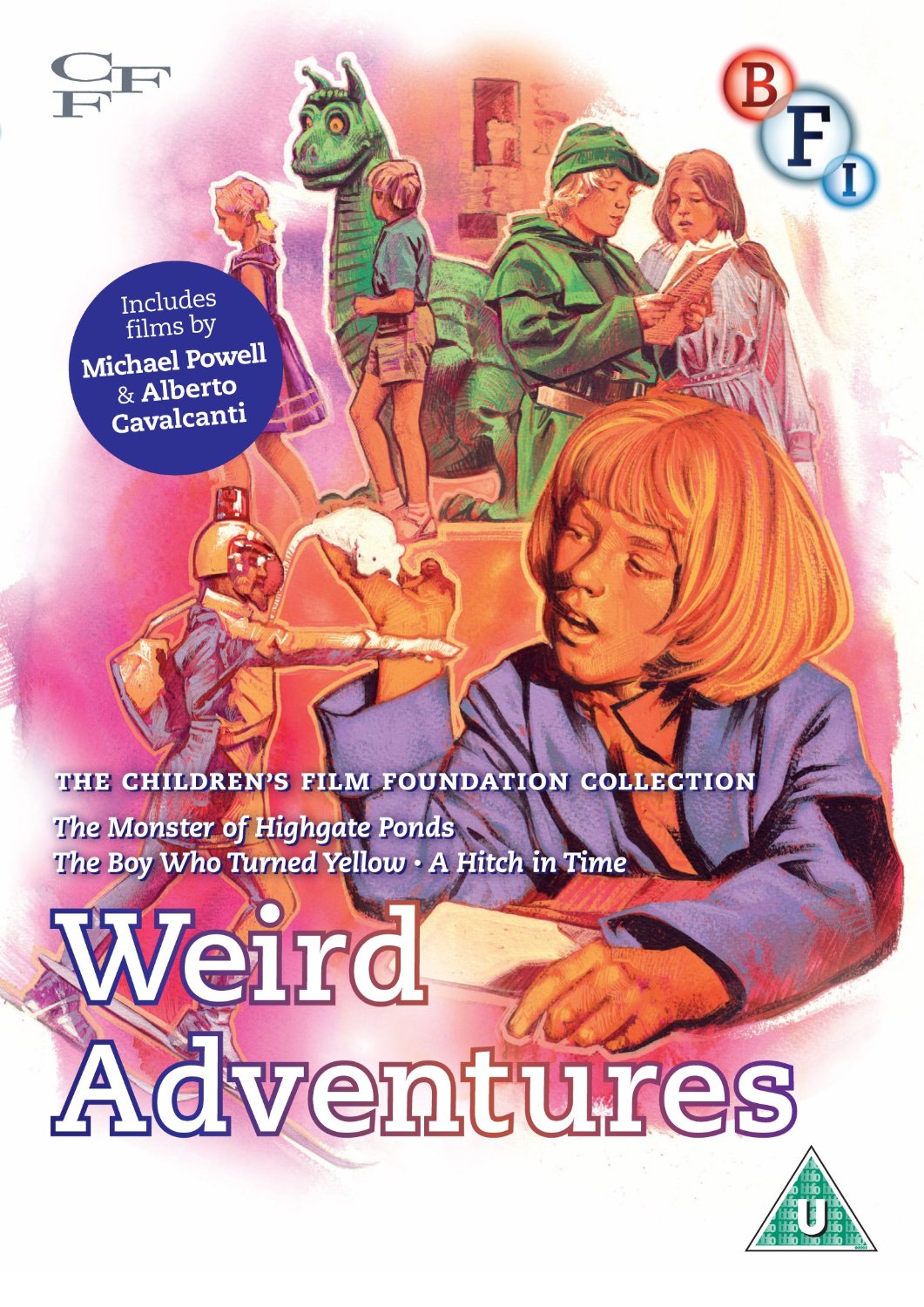 John turns yellow one day while travelling on the Underground, then meets a yellow man who travels via electricity and might just be able to help John rescue his lost mouse from the Tower of London. 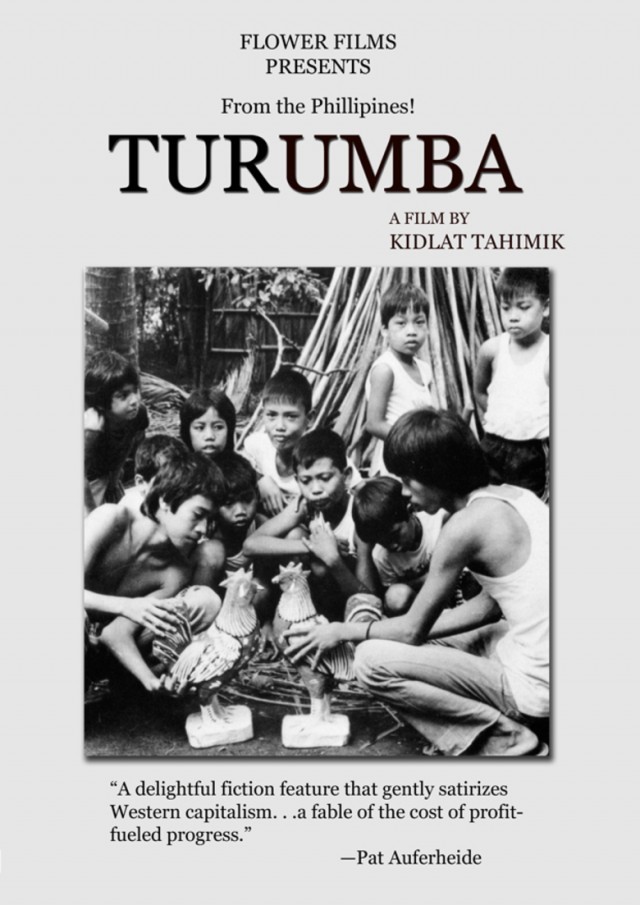 Set in a tiny Philippine village, the inimitable Kidlat Tahimik's film focuses on a family that makes papier-mache animals to sell during the traditional Turumba festivities. One year, a German department store buyer purchases all their stock. When she returns with an order for 500 more (this time with the word "Oktoberfest" painted on them), the family's seasonal occupation becomes year-round alienated labor.  Increased production, however creates inflated needs.  Soon, virtually the whole village has gone to work on a jungle assembly line, turning out papier-mache mascots for the Munich Olympics.  Long before the town band learns to play "Deutschland Uber Alles", the fabric of village life has been torn asunder.  The ironies of capitalism on the margin - Coca-Cola ads amid the shanties and ancient rituals - make easy targets for Tahimik's wit.  But his sharp eye never makes him seem bitter.  Here, as in Perfumed Nightmare, Tahimik demonstrates great affection for his subjects, without stooping to romanticism. 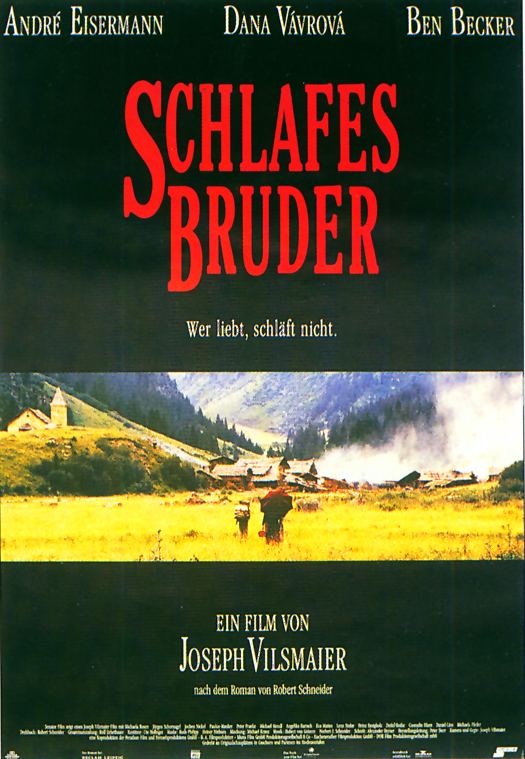 Director: Joseph Vilsmaier
Stars: André Eisermann, Dana Vávrová, Ben Becker, Conradin Blum, Daniel Lins, Jochen Nickel, Peter Franke
In the beginning of the 19th century, Johannes Elias Alder is born in a small village in the Austrian mountains. While growing up he is considered strange by the other villagers and discovers his love to music, especially to playing the organ at the local church. After experiencing an "acoustic wonder", his eye color changes and he can hear even the most subtle sounds. Elias falls in platonic love with Elsbeth, the sister of Peter, a neighbor's son, who has loving feelings towards Elias ever since. After Elsbeth marries someone else, Elias (aged 22) decides to end his life by not sleeping anymore. 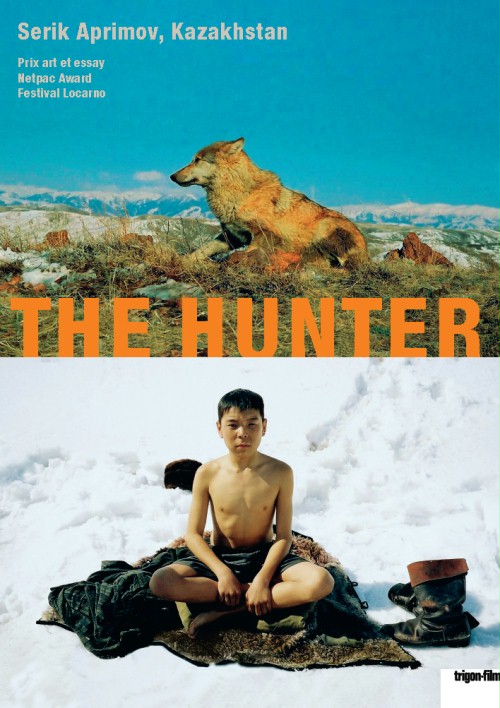 In an isolated village in the Kazakhstan mountains, Erken, a boy of 12, lives with his mother, a beautiful and alluring single woman. One night, when the mother is visited by a hunter, Erken steals the latters horse and his gun to hold up a shop. Sought by the police, he is found by the hunter who gives him a choice: to go to prison or to go and live with him in the mountains. Thus begins a voyage of initiation, in the course of which the hunter tries to pass on his taste for and understanding of life. 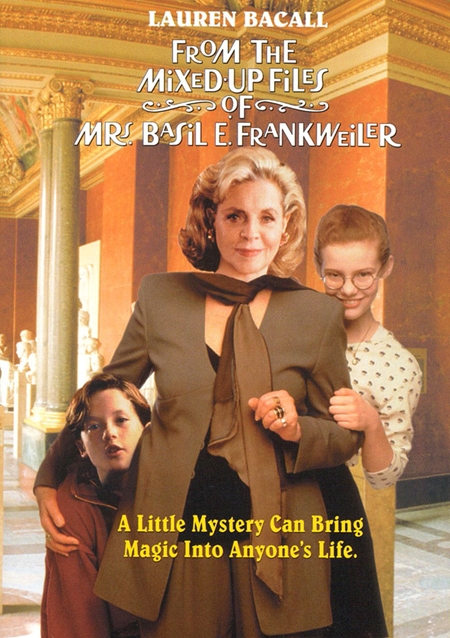 Two runaway kids hide in a museum. Once they are locked inside overnight, they try to solve a mystery about a statue supposedly carved by Michaelangelo, known as "The Angel". Will they solve the mystery in time?